Mr. Boldt’s great-grandson, Malcolm Goodridge, has led efforts to establish the scholarship with other descendants of Mr. Boldt and dozens of North Country donors who have made gifts to the scholarship fund at the Community Foundation.

“George C. Boldt Sr. is looking down on all of us tonight with great pride,” Mr. Goodridge said. “Each of you gathered here have helped keep his legacy alive and share his generosity to support education for our young people.”

Like his great-grandfather who immigrated to the United States from Prussia at age 13, Mr. Goodridge said, each scholarship recipient embodies the character and perseverance to succeed despite challenging obstacles.

Rande Richardson, Community Foundation executive director, said the outpouring of support to make the Boldt Scholarship a reality “has been inspiring.”

“We are honored to be entrusted with this meaningful expression of the Boldt legacy, not only for what it is and will accomplish, but how it forever connects donors and students to an important piece of Northern New York history and heritage,” Mr. Richardson said. 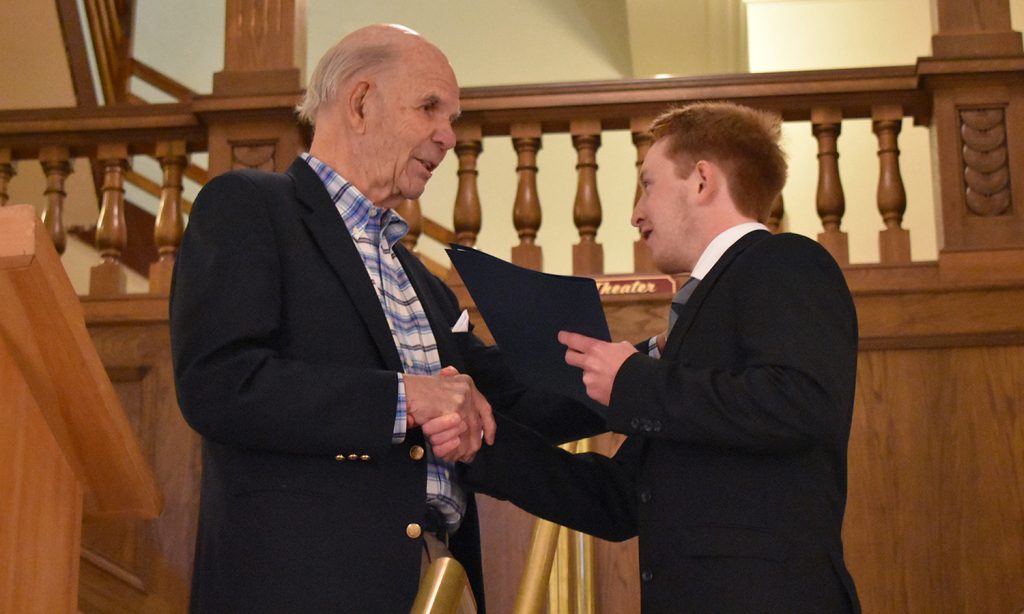 Matthew Ford, Alexandria Central High School, is a National Honor Society member and will graduate with a Regents Diploma. He is a varsity athlete, Frontier League All-Star, and captain of his bowling team. He also studies criminal justice at the Jefferson-Lewis BOCES Bohlen Technical Center. He has been accepted to SUNY Canton and plans to study forensic science and criminal investigations. Matthew aspires to serve in the New York State Police Bureau of Criminal Investigation. Throughout high school, Matthew has participated in FFA, American Kang Duk Won Karate, and volunteers for local highway clean-ups and fishing derbies. 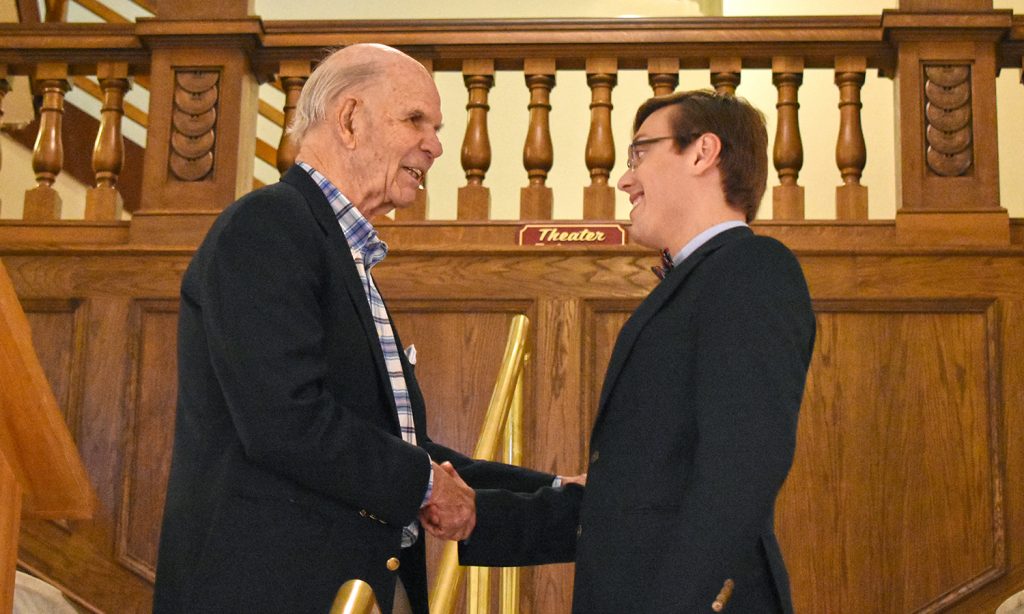 Dylan O’Connor, Alexandria Central High School, is salutatorian of his class and will graduate with an Advanced Regents Diploma with Honors. He has been accepted to a seven-year pharmacy program at Daemen College and the University at Buffalo School of Pharmacy and Pharmaceutical Sciences. He is a National Honor Society member and loves math, science, languages and music. Throughout high school, he has participated in French Club, Whiz Quiz Team, Booster Band, and the River Rat Rhythm Project. Dylan is also a four-time participant in the Scripps National Spelling Bee in Washington, D.C., and volunteers annually for Relay for Life and the Race for a Cure.

Abrianna Parson, Watertown High School, is a varsity athlete, basketball team captain, and Frontier League All Star who will graduate with a Regents Diploma. She also studies nursing at the Jefferson-Lewis BOCES Bohlen Technical Center, where her instructor praised her as a “role model for other nursing students.” She has been accepted to the nursing program at Onondaga Community College and aspires to practice nursing at her hometown hospital upon completion of her undergraduate education and licensing. After experience as a Registered Nurse, Abrianna plans to pursue graduate studies to become a Nurse Practitioner in her community.

About the George C. Boldt Scholarship

Mr. Boldt, (1851-1916) a one-time proprietor of the world-famous Waldorf Astoria Hotel in New York City, is known for his influence on development of the urban hotel as a civic social center and luxury destination. He and his family also left a philanthropic legacy that, among other things, emphasized education. In 1922, Mr. Boldt’s son, George C. Jr., established a scholarship program at Cornell University that bears his father’s name. According to an April 24, 1923, story in the “Cornell Daily Sun,” the elder Mr. Boldt “always sympathized with an eager student whose only impediment to higher education was a lack of funds.” During his lifetime, Mr. Boldt also helped put at least 75 people through college, doing so anonymously. It is fitting that this legacy continues through the Northern New York Community Foundation George C. Boldt Scholarship.

Jefferson County residents pursuing full-time undergraduate study — either in college, technical, vocational, or trade school — may apply. Applications are accepted from high school seniors or nontraditional students. The scholarship is a one-year award of up to $5,000 with three awards this year. Recipients are chosen based on academic performance, personal data, essay scores, and letters of recommendation. Students should show promise and potential and have demonstrated an interest in and service to their communities.

Since 1929, the Northern New York Community Foundation has invested in improving and enriching the quality of life in communities across Jefferson, Lewis and St. Lawrence counties.

Through partnerships with businesses and organizations, generous individual donors and families, and charitable foundations, the Community Foundation awards grants and scholarships from an endowment and collection of funds that benefit the region. Its commitment to donors helps individuals achieve their charitable objectives now and for generations to come by preserving enduring legacies of community philanthropy while inspiring others.

The Community Foundation is a resource for donors, local charitable organizations, and professional advisors. It also works to bring people together at its permanent home in the Northern New York Philanthropy Center to discuss challenges our communities face and find creative solutions that strengthen the region and make it a great place to live, work, and play.

DEADLINE APPROACHING! Do you know a student in 7th or 8th grade attending school in Jefferson, Lewis, or St. Lawrence county?

Here is their chance to award $500 to their favorite charitable cause. Apply by Friday, Nov. 19, 2021. Complete details at: www.nnycf.org/fifth-youth-giving-challenge-opens

Congratulations to our Youth Philanthropy Council of the Northern New York Community Foundation Class of 2022 Executive Committee Officers. Yesterday, the student-led Council held its peer elections for the program year.

We are pleased to announce an incredible slate of young leaders who are charged with guiding the 16-member Council through one of the most thoughtful, deliberative processes to award $25,000 in donor-supported grants to nonprofit organizations whose work strengthens the quality of life in Jefferson, Lewis, and St. Lawrence counties.

We are blessed to have such a talented team of students representing Congratulatio, Congratulations to our Y, South Jefferson, and Congratul high schools serving on the Council this year.

The Northern New York Youth Philanthropy Council is made possible by gifts from donors like you who make contributions to the Friends of the Foundation Annual Community Betterment Fund and generous corporate support from Watertown Savings Bank, the Renzi Foodservice Charitable Foundation, and RBC Wealth Management. Thank you for helping prepare the next generation of community leaders and believing in a bright future for our region.

Congratulations to Romi and all the officers! Proud of you Romi 💕

Congratulations to the officers! Wonderful group!

They are great leaders! Congratulations girls! 🎉

Congratulations to these Leaders; who, undoubtedly, will be future leaders at greater levels!! Another demonstration of the great things the NNYCF provides to all Northern NY Communities!

Congrats, Romi!! Oh the places you will go!!

Congrats to Romi & all the participants! N&P

Meet Grayson Feisthamel, a 2020-21 eighth grader at Watertown’s Case Middle School. For Grayson, “A community is a group of all kinds of people with different skin colors, races, religions, and sizes. Some people are wealthy, poor, athletic, intelligent, mentally challenged, and disabled.”

“A good community is where all people are living happily together without conflict and everyone has compassion for one another.”

As a 2020-2021 Northern New York Community Foundation Community Spirit Youth Giving Challenge winner, Grayson had a chance to present a grant to Watertown Urban Mission, a nonprofit organization he chose because it embodies his definition of community.

“The Urban Mission offers many different programs that help people who are less fortunate and in need. Some of the programs are Meals on Wheels, Food Pantry, Housing Support, and Dollar Dinners,” he wrote in his winning Youth Giving Challenge essay. “All of these programs being people together as a community and aid in making people’s lives better.”

Grayson recently met with Urban Mission Executive Director Dawn Cole and presented a $500 Youth Giving Challenge grant that will help the organization serve others in need. The grant is supported by donors to the Friends of the Foundation Annual Community Betterment Fund, a partnership with Community Bank, N.A., and a generous gift from an anonymous donor.

Grayson is one of dozens of thoughtful youths who looked inside his community to recognize an organization that works to improve quality of life in the region. The 2020-2021 Giving Challenge asked students from Jefferson, Lewis, and St. Lawrence counties to explain in an essay what community means to them and to choose a nonprofit that embodies their definition of community. Grayson’s essay is one of 20 chosen from 144 submissions.

Look for more photos and stories behind the 2020-2021 Youth Giving Challenge gifts in the coming weeks.

So proud of you Grayson!!!

Grayson! One of my favorites!!!